We narrowed down our choices and decided on the layout we wanted.

While cycle touring in 2016, we decided on the model we wanted.

We ordered Honu from Euro Camping Cars  in October 2016.

In the course of our discussions we also needed to work out what option packages to order and what dealer accessories- ie solar panels, LPG gas and much more.

Sticker shock was the other issue we needed to get our heads around. Ouch.

Moving of funds presented a bit of an issue. Having that amount of money floating around in Cyber space was somewhat of a concern. But after a number of transfers Phill informed us all was well and our account paid.

Honu arrived on site early May 2017, only a few weeks prior to our flights over.

We flew into Paris, rented a car and appeared at Euro Camping Car's doorstep 3 hours later ... and there was Honu, waiting for us ... 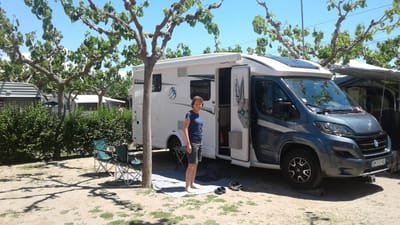